Praying is supposed to be a one-on-one talk with the god you adhere to. It’s not supposed to be something people announce publicly, while giving each other pats on their backs. If you do so publicly, then I really hope you’re also doing something beyond just praying. Every dollar helps. Every piece of old clothing helps. However, if all you do is publicly pray, but don’t donate, then go and get yourself some ice cream a few moments later, then you’re a piece of shit. Your public prayer is selfish and the only thing that your idea of prayer does in situations like this, is perpetuate an idea that prayer is all it takes to make Australia, or any terrible circumstance become better. It definitely does not.

I recently came upon this comic by EnComics: 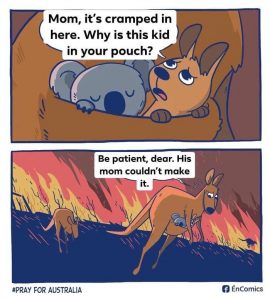 I ‘Liked’ the comic, even if I personally disagreed with the associated hashtag. However, originally, I didn’t comment anything except “Instead of praying, I donated.” That was two days ago. I received 109 likes so far, for that comment alone. So at the very least, 109 people agreed with me. I left it at that and went away. Then I got a positive comment from the person who reposted the comic on their IG page. So I went to check to ‘Like’ his comment. Of course, being the dumbass I am, I also scrolled through the page to check other comments. Throughout the entire comment section, dozens of comments echoed the same #prayforaustralia hashtag. Normally, I leave people be to do their own thing, because I know in this regard, whoever is religious in Australia will see it and at the very least, see that some people care enough to have them in their hearts. However, I came across a couple of religiously fanatical comments that kept trying to push their insane ideals onto others. Paraphrased, “ONLY GOD CAN DECIDE WHO TO SAVE AND WHO TO DIE!” They were responding to atheists making snide remarks that prayer doesn’t work, and that they should do something about it instead.

These days and actually, for a long time now, I usually just sigh, shake my head and walk away from such things. However, something spurred me on to respond to this person’s crazy talk. So I responded, paraphrased, “Only science and action can solve the world’s problems. Prayer only helps the selfish continue to feel like they did something, without actually doing anything.” I dared her to stop using science in her daily life, if she is so confident about her religious beliefs. Of course, she came back later and gave me a cop-out answer. She told me, paraphrased, “I never said I didn’t believe in science. However, God and science are not mutually exclusive. God created scientific advancement.” Blah blah blah.

In other words, “God created everything, including science. So I will continue to use science to help me in my daily life. Thus, God is great!”

So what is the point of prayer again? 😉

After reading what she posted, I could have continued the little argument. Instead, I blankly stared at her comment for a few seconds, sighed a little, then moved on.

I responded to a couple of other posts after that. One from an annoyed atheist who supported the people praying, and another from someone who calmly explained why some people choose to publicly show their prayer. I admit, originally, I was passionate and responded passionately to both of them. However, I deleted both my responses. Instead, I responded calmly and told them I agree with them for the most part. One of the comments I responded to came from Alec. Her heart is in the right place and from the very tiny correspondence we had, I felt she is also a nice person. She responded that sometimes, all people can do is pray when they have no money to give. She told me she wanted to donate, but when she asked her mom for some money for the donation, her mom told her that it’s all a hoax and all of this is just Australia wanting some attention. While I was totally calm when I read that, I was pissed off on the inside. Australia is literally fucking burning all throughout the country and millions of wildlife has died, including people! It’s incredible how people like her mom can exist.

I know I will continue to get dings from the comments I already made on that comic page. However, for those who has come here and read this from me, know that I normally do not have problems with your religious beliefs. So long as you either keep them to yourself, or you do it positively for others. If I came off aggressive, I apologize. As papigeorgewashingjesus has mentioned:

To People who comment shit like ‘prayer does nothing’ : What’s the point in even saying it? You don’t believe in a religion or anything of the sort? Neither do I. But at least let those who do put their faith into something and let them have hope. Some of those who pray dont just do that, those who can donate etc. And those who can’t donate are trying their best by sharing, as well as praying and hoping. It’s a bit pathetic saying stuff like that when there’s bigger things to worry about besides someone’s beliefs. Line, y’know, the fires in Australia that this post is trying to spread awareness about. It’s fine to have beliefs, religious or not, but there’s no need to go around saying stuff like that when nothing good comes of you saying such things. :/

True for the most part. I responded to his little rant with the following:

Originally, I had the same sentiment as you do here. However, scrolling down the comments, I noticed some religious fanatics saying shit. So that spurred me on to do some countering. So if you see my comments here talking about ‘action > prayer’, it’s primarily to smack some sense into fanatics. However, on one tiny note. I disagree with you that there are bigger things to worry about besides someone else’s beliefs. Religion has fucked the USA over quite extravagantly. Other people’s religious beliefs are putting the wrong type of people into government. Actually in Australia, recently, a law was passed that doctors and hospitals are allowed to discriminate based on religious freedom.

This part of the comments, reminded me of a back-and-forth between Tiberias and Guy de Lusignan in the movie Kingdom of Heaven, where they said:

Tiberias: That I would rather live among men than kill them, is certainly why YOU are still alive.
Guy de Lusignan: [Chuckles] That sort of Christianity has its uses, I suppose…

Note that both of these men are Christians, but based on the theatrics of the movie, Guy de Lusignan is a bad guy who wants to wipe out Islam. Tiberias on the other hand, would rather live in peace with them, than make war.

Anyhow, here is a list of sites where you can contribute in helping to save Australia:

Source: How Canadians can help Australia wildfire victims and firefighters

Not all donations have to be money. If you cannot afford money donations, try sending clothes, food, animal-related stuff, etc. Every bit helps. You can be sure I will be donating more when I get paid at the end of the month. However, even then, for those whom are religious, continue to pray for them, because I know whoever over in Australia is seeing your public prayers, will also feel your heartfelt words.