Mr. Krush never cease to churn out some raging orgasmic sounds from his machines.

So an update on my stuff. How boring. [thumb up] Got off my day job at 4pm, went home, touched up on some of the decals I was working on for [censored]. Yes, our CTO has requested I no longer mention [censor] until AFTER it’s finalized and launched into the public. I must have a code word for it. I’ll call it… Hmm… [rubs fuzzy chin] Hmm… I’ll call it… I’ll call it “Fuzzy Chin”! YES!

The Fuzzy Chin working demo was done last week. Now I’m just beautifying the prototype. I also should create an ad for the ad boxes.

[“Bulls on Parade” – Rage Against The Machine]

Too bad they broke up.

Right, so as I was going to say, after my day job, went home, touched up some stuff, changed, called Benny, picked him up, and went to the Keg in Ditchmond. We went there a bit early. Simon came afterwards, talked a bit, then Jason and Ray came finally. We talked for a long time, had dinner, then Simon told us he was leaving the company.

Ball busting my ass, but I’ll let this one go… [sigh]

After I dropped Benny off, I phoned Pat, picked him up at his place, went to Timmy’s on #3 and Cambie Road, he wrote his open book exam, while I wrote a bunch of jibberish on project management, corporate goals and key innovations, etc, etc, etc… All the usual corporate mumble jumble that I have always tried to avoid, but now… [sobs]

Benny suggested I take the PMP certification, but 7500 hours worth of management is friggin crazy! That’s equivalent to 5 years of guideline restricted management! I don’t exactly know what their guideline criteria are like, but if it’s moderately equal to general management, then I can safely say I’ve done about 1200 hours so far. Come on, I ran my own company and managed a team and projects, as well as my years of freelancing and managing projects and etc…

If I successfully pass the PMP examinations, my salary may be boosted from 55k to 155k per year. [grin] Not bad eh? 8]

Alas, I’m not making 55k right now. In the Autumn of 2006 maybe, but not right now. Right now, I’m making schlongs and marbles. Just enough to get my family’s basic necessities settled, and a bit for my own stuffs.

We were originally going to get an office in Ditchmond, but if we get 3mill VC, then most likely the VC’s will want us to station in downtown Van. Ray actually suggested he wants the office to be stationed in Seattle. NOOOOOO!!!! NOT SEATTLE!!!!

Well, this is another meaningless entry… Here are some pictures of Pat and I at Timmy’s about 2.5 hours ago…

Oh BTW, shit! NEVERMIND… Nevermind… I didn’t start to say anything… HAHAHAHA! I am so bad… You know why my swearing has been so bad? Hmmm… Well the bad swearing started around July 2005… Get my drift? Good, no more questions.

Let me try to do something… Before ‘our’ problems, I didn’t swear so much. There’s something I want to say, but I won’t say it, because it will just bring the anger out of me again. So the thing I will try to do is swear less, which also possibly means I will try to say less sexual things, even if I mean them in a humorous way.

What do you all think?

Yes, there are actually more than 3 people reading my entries. There are actually about 8 regulars – 6 of them lurkers, but they do email me occasionally. So I would like to thank you all for wasting your time here with me… 8] 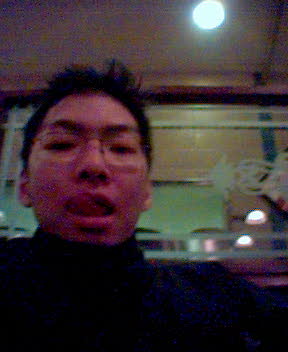 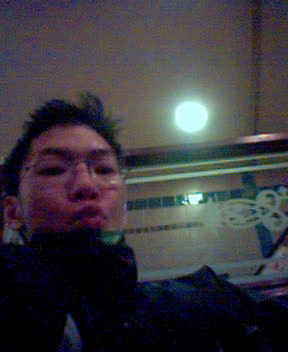 ^^ Charming as usual… Haha! [shoots myself]

^^ This is Patrick Leung. He’s about 5-8, weighs about 165 pounds, fit and athletic, plays pretty good tennis, loves outdoor stuffs, prefers Asian girls [wink] who also likes outdoor sports, plays the saxophone, can speak some Japanese, and yeah… He has a good heart. Of the many people that I’ve met throughout the years, Patrick is unique in the way where he is just simply a good person. Though a bit erm, WEIRD sometimes, but who isn’t? 8] 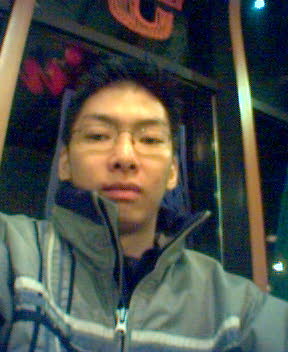 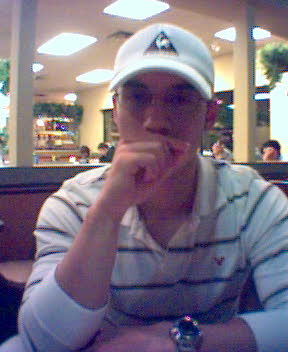 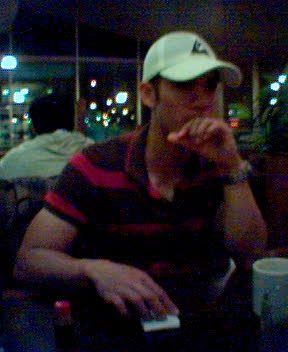 ^^ Patrick! WOW! He’s quite cute! Any girls interested? [wink] Oops, Pat doesn’t like me to do this sort of thing. Haha… No seriously, I just like to fill my entries up with pictures, and he’s just a victim of circumstance. 08]

^^ After dropping Pat off, I took the longer way home. Instead of turning off Westminster Hwy onto #5 north-bound, I went straight and turned north onto Jacombs. I stopped atop the overpass, and listened to a song by Andy Lau while I scanned the city lights of Vancouver. I thought about Virginia, June, and Cindy, and all the trips I made to see them over the last 6 years. I took a few pictures, but this is the only one that is the clearest… Nothing much really.