I would just like to enter my first guild raid experience with Final Call. Yesterday evening, after helping Terry’s character for a bit, I ended up helping my guild out for what was supposed to be an hour and 40 minutes at Upper Black Rock Spire (UBRS), but it stretched well into the 2.5 hour mark. 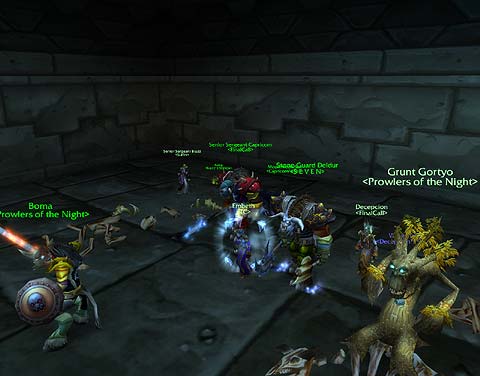 ^^ It wasn’t a full guild raid mind you. It consisted of members from other guilds such as Suffer and Prowlers Of The Night. Overall, it was a good raid. I won a couple of rolls – a Class Blue belt and a Class Green single handed axe and even acquired a level 60 quest which I’ll complete once I get the expansion.

After that raid, Decepcion, a guild Councilman lead a 5 member party into Black Rock Depths (BRD) to help me and two other guildies retrieve a Core Fragment for Attunement to Molten Core. Helpful for those who want to skip directly to MC without having to do all the intro stuff. 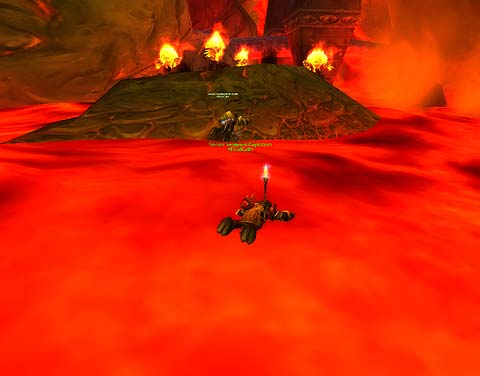 ^^ Seen here is my massive Tauren body being cooked on the lava. Mmm… I wonder what I taste like. Someone once said I taste like slightly toasted bagel. 😀 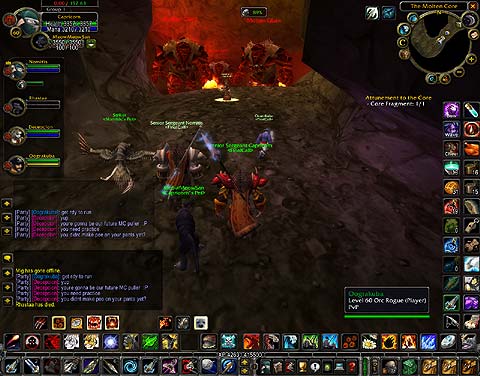 ^^ Once we got the Core Fragment, we ventured into MC and I actually pondered on why we did that cuz it was crazy to even try to go in with 5 members, and not all of us are 60’s – not that it mattered actually, considering that MC is really for 20 Epic 60’s and/or 40 member raiding. Those two monsters up there are fire elemental giants of sorts. 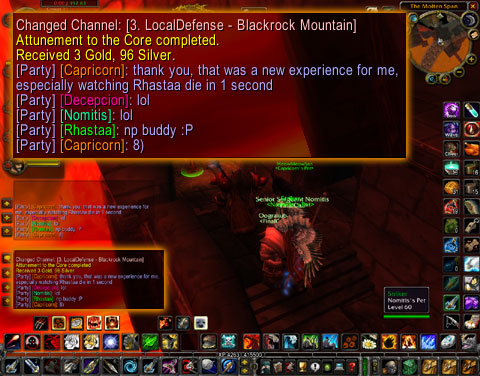 ^^ Decepcion lead Rhastaa, our level 52 warrior up and well, his low level aggro’d and caused the two giants to chase after him. He died in less than 2 seconds. I was like, “HOLY CRAP!” We ran out the instance and we ended up back at the entrance to BRD. Then I realized why we ran into the MC instance. At first, I thought Decepcion wanted to give us a taste of MC by scaring us a bit, but aside from that, it was a way to easily get out without having to run all the way back.

Overall, I found Final Call a pretty good PvE raiding guild. The leaders are mature and respectable. A new group of Horde members recently joined our guild as well. Seems like the smaller guild merged with ours. Mugrim and his band are seasoned warriors and are a great asset to the guild. It actually makes me feel a bit guilty to leave them in two months.

Once I transfer my level 60 Tauren over, and join Plastique’s guild there, that’s it. No more transfers and no more of anything! I have to stick with one guild and that’s it! Sons Of Hellscream was the best, and if it weren’t for them kicking me out for inactivity, I would still be with them. Ah well…

Signing off, your Gamer Geek…

PS: I’m going to make a Spongey Horde character and try to get her up to level 60 before the two months are up, and probably switch her for Capricorn in the guild… What should Laura be? Hmmm…. What should she be? A Tauren, Undead, Troll, or an Orc? Troll and Orc girls are sexy… I’ll make her an Orc girl… 8]

You shoulld make her an Orc rogue. Rogue’s should have some sexy gear that you can kit her up with. xD

Hmmmm… I wonder how difficult it is to play an orc rogue… I’ll try! 8D I think Spongey will look really fine and delicious! 8D

Think of it this way. Rogue’s wear “Leather” armor.

You want to get you now! Or rather get her now! NOW! Yeah, I deleted her level 7 orc hunter and created a orc rogue. She’s now level 2. HOT! Now if a Tauren would come around and schlong her…

Alas, you are the only Tauren I know. So i think you’ll have to find a way to get your own character on there with hers, and let them get freaky.
/get yo freak on