I’ve been tricked! Upon closer inspection, this is 4 litres of Dairy Glen milk! [waves fist] It tastes a lot better than Lucerne though. Lucerne milk tastes like a cow just gave birth and some of its birth-juices/slime somehow got mixed in with its milk. If you’re wondering how I know what the birth-juices/slime tastes like, I don’t, but I have ridden my bike passed cow and sheep farms, and know what the smell of birth is like. [sickened expression]

My music collection has become blah. Good thing I have VIP Live365. 8]

Pat came over about a week ago, and upon entering my room, he looked at my desktop and asked, “That Cindy?” I raised my eyebrow and looked at where he was looking, then turned back to him and said, “Umm, that’s Lucy Liu.” Then today, my mom comes in and says, “Why do you still have her on your computer?!?!” Again, I raised my eyebrow and said, “Umm, that’s Lucy Liu. She’s a 38 year old actress.” My mom then leans in a bit and says, “Hmm, is that (some chinese name that I don’t remember)?” And I replied, “Uh, I don’t know who you’re talking about but sure…”

Now, I have a Memories section with Cindy’s pictures, so I’m not going to put her picture here, but you be the judge. I present to you, Lucy Liu in all her 38 years of yumminess… (mind you however, this picture was probably taken when she was younger) 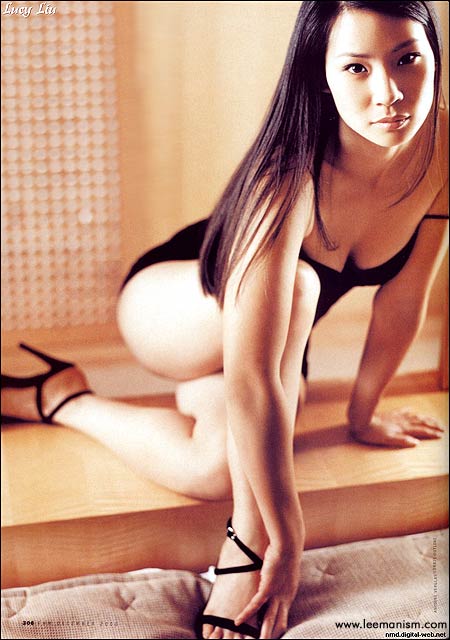 I guess there are aspects of Ms. Liu that resembles Cindy, like her cleft-upper lip, overall shape of the head, the eyes… [pauses in bewilderment] No. Erm, no, it’s all in the mind. Yes. That’s right. It’s all in my head. Just like that time when I thought I saw Sandra lift her skirt up to show me her Hello Kitty panties. Yes, that was all in my head. Yup.

You know, reflecting back on my past intimate experiences, I realized that I never did much of any type of chasing. I never chased a girl before. This is how it usually happens: 1: I meet them amongst friends, 2: I express a question to the group – usually a humorous one in which the girls laugh, 3: then I put ‘random’ people (usually the girls themselves) on the spot and direct questions to them, 4: the girls laugh some more, 5: the guys get a bit lost in the humor, 6: then the girls direct the questions back at me, 7: I smile very broadly and of course, as blunt as I can, answer them, 8: then they laugh even harder, 9: they become playful, 10: they willingly give me their contact info, 11: we go out again one-on-one, 12: lots of emails between us over a period of a few days to a few months, 13: and finally, stuffs…

ANYWAY, without stirring up the suppressed boiling anger super deep inside again, let’s jump to the next sub-topic.

I think I am at a stage where I might actually have to chase someone that I have an interest in – or at least, a potential interest in. However, it sounds contradicting because how can I be interested in someone if I don’t know whether that person is interesting in the first place or not?

Anyway, this song is way too fruity for me – must change song…

No no no, I’m not bring back up unwanted memories… Maybe I am, but I am trying to say that it seems like now I actually have to try to chase someone, or actually have to do work to pursue someone, and the thing is, it might not even be an initial mutual interest. [sigh] So much work for something that I am not sure will work out or not. Of course, I always have a back-up plan, but it’s still a lot more work than my usual stuffs.

[laughs] I have been battling myself about this for the last week. I asked myself, “Should I be doing this? It doesn’t feel natural enough.” Then I would think moments later, “Nah, this isn’t good. I feel stale.” A bit later, I would say, “Maybe I could give it a try. Who knows right?”

What I really want in my future companionship is a no-bullshit relationship. I’ll be reverting back to my old ways for some aspects. First and foremost, I won’t nearly be as lenient as I did for Cindy towards (any of) my future companion(s). I just don’t want to have to deal with that crap. I have other responsibilities that require my attention. Right now, after the falling out of my relationship with Cindy, I found myself to be in perfect timing with everything else. I will not allow anything else to screw this up.

Then again, when I see Ray (our CEO), I feel a bit discomforted. Yes, Ray is a good businessman, great manager, and is quite successful in everything he does, but ultimately, he IS MARRIED to his career/work. It’s possible there are some women out there that are attracted to him, but I don’t think he takes them into consideration.

Back in the day, I thought I could be like him, but as I grew older, experiences swept under my belt over time, and the refinement of my thoughts and emotions, I felt I couldn’t do the sort of work he does as the CEO and Chairman. Today, looking back at myself 6 and 7 years ago, I was just not cut out to be a CEO and Chairman. Today, I could lead my own team, but only under the leadership of someone else.

So this is what happened today (Sunday I mean): went to bed at 5am, mom shoved phone into my face at 8am, Marlon invites me to his daughter’s 1st birthday at 3pm, goes back to sleep, wakes up around noon, shower, stuff, eat cha siu bow, drive over to Marlon’s place, help with the decorations for about an hour, leaves for work meeting at 4:20pm, arrives and meet with the team from 4:30pm to 7:15pm, goes home, eat dinner, eat/drink yam dessert soup, fooled around for a bit, went out cycling then to the gym, came back here, did some stuff, and now I’m here typing this lun. LUN!

My mom is the serpent empress.

My dad is congee.

I love milk from Dairyland.

That’s a nice pic of Lucy Liu. I had no idea she was 38 years old! You know you’ve made it big when you’re on the Simpsons 🙂 hehe

Questionnnnn… would you be able to pick me up from the airport on Thursday August 31st? 😀 My flight arrives around noon.

Sure I can do that. You’ll have to give me an ‘exact’ time… Well, say the earliest time you’ll be arriving. Just you right?