(Playing “The Tune” by Url)

Yumminess! I’m having my nightly dose of a shot and a half of Malibu and some sort of citrus surprise. Gotta try to be in bed by 2:15am LATEST!

Seems like I’m entering an entry at least once every one or two days. I wanted to enter something ‘meaningful’ earlier, but was caught up in doing stuff. 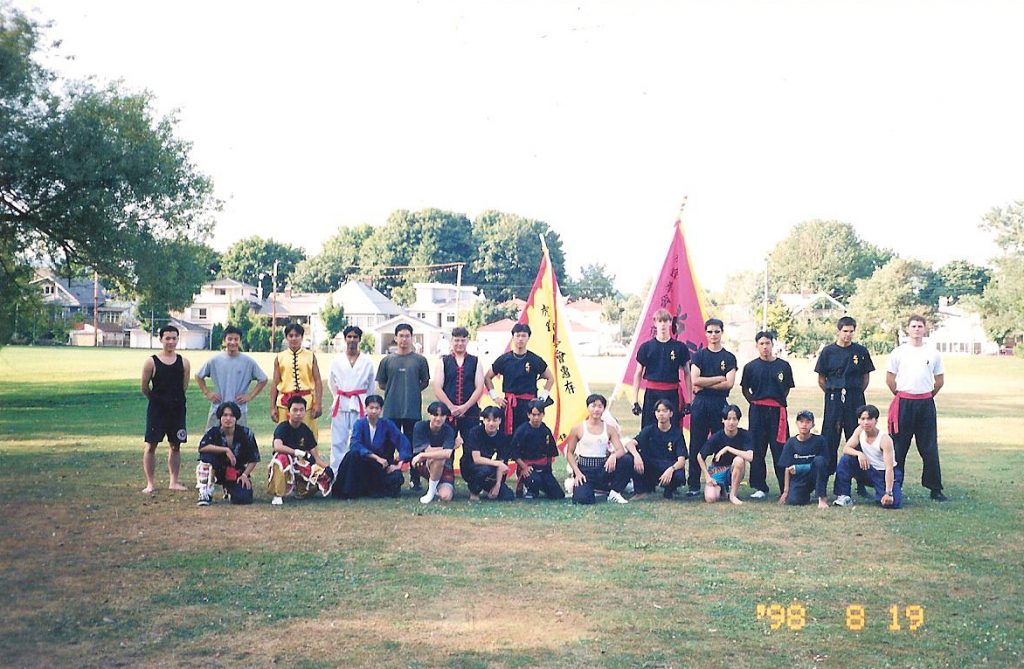 August 19th, 1998 – Tiger Martial Arts @ a park near Victoria Drive (Benny’s birthday too)
I started on my weight training and cycling program. I’m going to ask Patrick to give me heavier weights if they are still too easy next time. Cycling has also been a past favorite reborn. I’ve been doing that almost every day – except the days I weight train because I do 10 minutes of cardio already.

Right, so enough of the boring intro… [yawn]

I came back from the gym around 6pm, ate my dinner, etc, and a phone call came in, but I didn’t answer it. My mom picked it up and I barely heard the ‘conversation’. I thought I heard my mom say in Cantonese, “Blah blah blah, stop calling Leeman, blah blah blah, don’t ever call back, blah blah blah” then my mom hung up. I went to take a shower, and came out and did some stuff on my computer. My mom comes in and asks me, “Has that bitch called lately?”

Then she said, “Good. If she calls, you should hang up on her. That immoral whore!”

I grinned and asked, “I’m just wondering, who was that person who called earlier?”

My mom left my room and replied, “I don’t know. Whoever it was called but didn’t say anything. So I assumed it was that whore of your ex and told her to stop calling you.”

My mom had that usual suspicious expression, as if she thinks I am still defending/protecting Cindy, and says, “How would I know. Someone called and didn’t speak. How do you know it was Virginia? Shouldn’t she be calling your cell phone?”

I scratched my head and squeezed my left nipple and answered, “It could also have been Lisa, but how often does she call me?”

Then we both pondered on it for a bit, and I went back to doing what I was doing.

MUCH MUCH MUCH later, so about 30 minutes ago, I went through my voice messages in case someone did call my cell and Fido isn’t picking up new calls AGAIN… [sigh] And FOUR old messages, saved, that I thought I deleted… All four were from Cindy. The latest one was the last weekend before we broke up – either Friday March 17th or Saturday March 18th. The oldest voice message is quite old. It was made around early October 2005. Cindy won four premier tickets to Dreamer, and she invited me to go with her. I remember I used to save that one over and over and over again every time I heard it. There was one time I even played it for Cindy around January 2006. She was totally surprised that I saved that message still.

Anyway, I played all four messages. When I was hearing them, I honestly did not feel anything. It was however after I heard 7 other ‘hidden’ messages made by other people and hung up, that I realized of course, that I still miss that bitch.

Just give me my comfort for a moment okay? Thank you.

Yes, I saved all four messages…

Last night, I was a bit restless around 11:30pm. I recorded some tunes onto a CD and brought it out with me. I went for a short drive to a place I took Cindy to very late at night about 11 months ago. It was on the western-most trail that Carlo, Cindy, and I rode our bikes on in September 1st, 2004. I took Cindy there late at night in May 2005 to look at stars and talk. We talked about really silly things, like frogs croaking, and cows mooing, and the stars being dim but beautiful, and other things. Even though she was dressed regularily, though wearing short heeled slippers out in cold weather, she was still very beautiful to me.

I already entered that night’s events in my private journals, so I’ll just leave it as that.

I went back out there around midnight last night because I wanted to talk to someone. I didn’t want to burden my friends so I drove there, parked, and walked out into the near-darkness. The stars were out, and I could see an infinity of dimly lit stars above me, with wisps of clouds everywhere.

I didn’t shed a single tear, but I did talk to the Heavens. It was my way of releasing myself. Just tell it the way it was, how I saw it, felt it, experienced it. I wanted something or someone in the end of my conversation with Heaven, but I didn’t say who or what. All I said was, “You know my heart. You know what I desire.” Then I left for home. I even thought about driving down to the South Fraser Arm, exactly where I first took Cindy 11 months ago before taking her to the trail. I remember she leaned against the block of wood that night, facing eastward, and I watched her from about 10 feet away. All I wanted to do at that moment was walk up behind her and hug her tightly against me. I didn’t that night, but no one have any idea how much I wanted to do that.

Indeed, Albert and Jon, and everyone is pissed at her, and she is no longer under my protection, but I remember those instances and I just wish things were different – I wish things are different today. I wish… Well, you all probably know what I wish for, and I won’t say it due to obvious ridicule, and I should know better too, but this is my heart I am talking about here. Yes, logic and reasoning had always ruled the majority of my domains, and I’ve always supressed my heart’s desires. This time, I just can’t.

HOWEVER, don’t be fooled though. Though I desire her based solely on those good sentimental times we’ve had, I definitely DO know better. Many times I wanted to do something ‘stupid’, but I controlled myself – with A LOT of difficulty, but I did it.

The fact I truly didn’t feel anything when I reheard all her saved voice messages told me that I am indeed letting go – slowly, though it will still hurt for quite a long time more. I didn’t delete her messages BECAUSE unlike her, I hold what was barely there as our relationship very sentimentally close to my heart. She may be a slut, but I’m not. She may be an evil two-faced bitch of society, but I’m not. She may jump on some other guy’s cock the next day after a break-up, but I won’t fuck another girl just like that. In short… You know what I mean anyhow.

Added 12:04pm: I just heard a woman say, “That’ll teach you to lick my muffin.” I cocked my eyebrow and pondered on that before coming back here to enter this line. Ah, this adds to the WitM category because of this one line!