Ever since I had a chance to play games like Star Wars (Amiga/Commodore 65), F-15 Fleet Defender (PC), Red Baron (PC), and A-10 Warthog (PC) back in the early 90’s, I have been a HUGE fan of flight sims. In the mid 90’s I had a chance to play as a cadet all the way through to a colonel (or was it captain?) in Star Wars Tie Fighter: Defender of the Empire – both the mouse and joystick versions, including the demo of Star Wars X-Wing VS Tie Fighter. From then on, I’ve been infactuated with the creative idea of the Imperial Navy and its thousands of capital ships, and the Imperial Fighter Squadrons.

So now, many years later, you would find that though my taste in games have shifted to role playing and driving sims, I still fantasize the day I could again fly amidst my squadron buddies to crush the rather irritating rebels and their allies! [laughs maniacally] However, that doesn’t seem like it will happen any time soon, or ever. [sobs]

Alas, I had the chance to FINALLY try out Star Wars Galaxies – AFTER procrastinating for YEARS. I blame it on World of Warcraft and Cindy. Oh and don’t forget the alcohol and sushi! [waves fist] AND before I give you my heartbreaking review on SWG, here are some ‘memorable’ pictures from the game from my perspective… 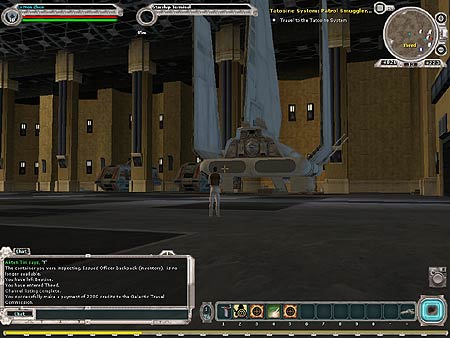 ^^ When I first saw this in SWG, vague memories of my past came back up… I remember escorting one of these from a space station to a Star Destroyer once. 8] 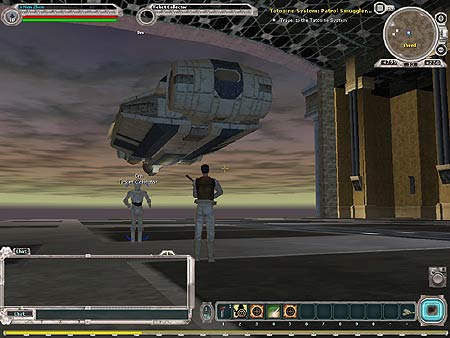 ^^ That’s a transport coming to pick me up from wherever I was to wherever I was going. As you can see, I am hatless here compared to my other pics below. Hatless means NOOB! I rather be called “Newbian” though, and did you know I once had a great fetish for nubian girls? [ahem] 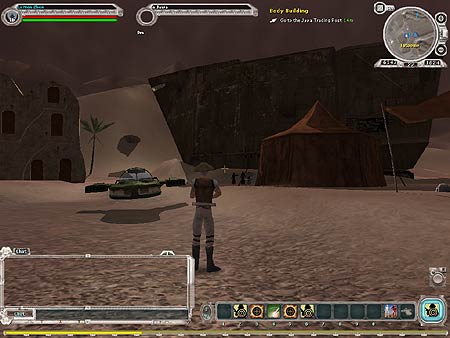 ^^ That’s right baby! It’s a Jawa Sand Crawler! You know, when I first saw these things in SWG, they were quite small. In the original movies, they were HUGE! HUGE as in MASSIVE! MASSIVE AS IN GYNORMOUS! (I’m too lazy to check the dictionary, so correct me if I misspelled it. In fact, correct me if I misspelled “misspelled” wrong. Then again, if “misspelled” is misspelled wrong, then that means the word doesn’t exist. Thus there is no correction needed for a word that doesn’t exist! Right?) 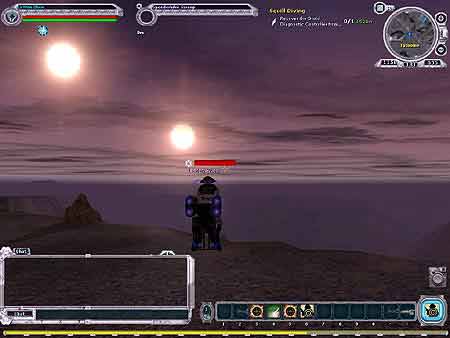 ^^ This reminds me of a time when I was riding on my Kodo in Tanaris towards Un Goro Crater in WoW. I left it on ‘auto’. You see, I was tired of pressing the forward key to move, plus Cindy called me and she was telling me something that required a bit of attention. As Cindy was finishing off her sentence, I SUDDENLY realized that I was about to run off the cliff. That was, I have to say, an AWESOME fall. 8P 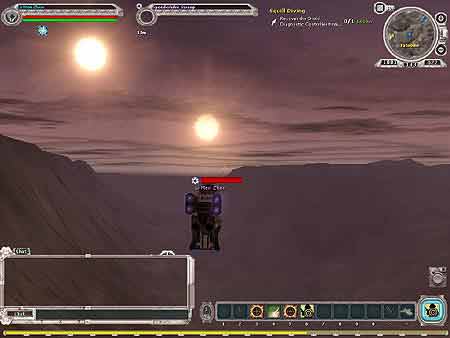 ^^ Fortunately, however, I survived THIS fall – the one you see above. In WoW, I died, and umm… Yeah. 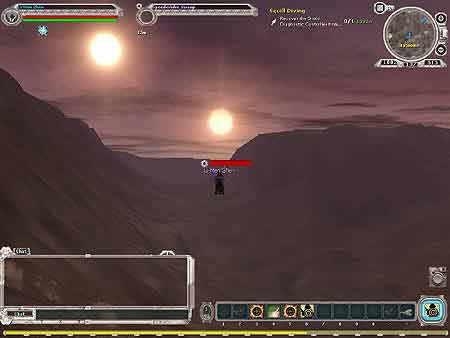 ^^ The two suns of Tatooine. It’s quite beautiful just beyond the mountains, while I’m flying off the cliffside, to my supposed-to-be-death, and somehow still land my Speeder as though it was made of feathers instead of heaps of metal… 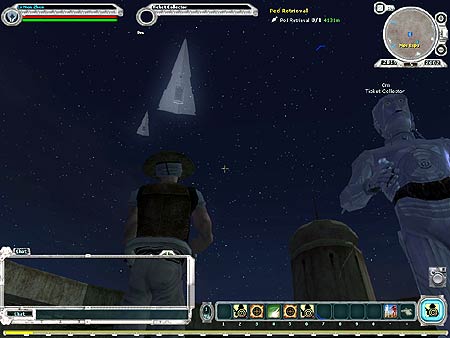 ^^ Lastly, the most beautiful shot of them all. As I waited for the transport to come pick me up, I noticed TWO Star Destroyers in high orbit right above the city I was in! And no, that isn’t C-3PO beside me. That’s just the Ticket Collector. When I saw those two SD’s, it brought back memories when I flew with Red Gamma through the barrages of enemy fire trying to keep our ship alive. Ah, the memories of years long passed.

[chuckles] I know, it’s all just games and creative story telling, but sometimes it’s kind of like how I lived and is living my life. Almost a metaphor… When I looked up at those two ships, I smiled. I couldn’t help it, because I was once ‘up there’. With story-telling inside, I just think that the new pilots of ‘today’ are up there, training and becoming the new generation of defenders for the empire, while I’m some retired old fogey, wandering the wastes of Tatooine, earning ends meet, gaining repute as an Imperial Special Forces operative – and yes, that is actually my designation in SWG.

Unfortunately, SWG lacks in pretty much everything else. After playing a HUGE score of online muliplayer games, I find SWG to lack in the fun and cool factor. The graphics are outdated, the response time is atrocious, the semi-action sequence when combat starts is lun, and I don’t know, it just seems that the game is lacking everywhere. I think the only reason why it even has a member base is because of their association with it. I gave the game a chance even after reading some really negative reviews on it because I had some history with the games prior. My goal in SWG was to one day become a Tie Fighter pilot stationed inside a Star Destroyer, but that dream seemed so far away, and since the game was already lacking in everything, I didn’t have the motivation to continue. Thus a week and a half into the game, I cancelled my paid subscription. I still have about 2.5 weeks left, so I might play a bit more before it expires.

So far, I still think WoW IS THE BEST online multiplayer game out there. Guildwars has its merits, and so does EVE, but WoW has everything – including annoying immature players… [sigh] 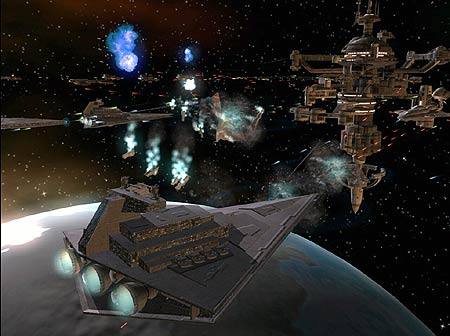 ^^ Screenshot from SW Empire At War. The Imperial Navy is hot! 83