I’ll be posting up my battles in Neverwinter Nights 2 soon, as well as some new screenshots from WoW BC, and NFSU2. Ain’t that just so damn hot? [vomits]

Oh yes, now I remember. Another completely pointless entry from your’s truly. Since Jon and Patrick were the only two who were ‘recently’ in my room, the rest of you haven’t stepped foot here, so I’ll give you an update of what it looks like now. Plus, I’m showing off these two Tenjho Tenge wall scrolls I got yesterday through mail order. SWEET! 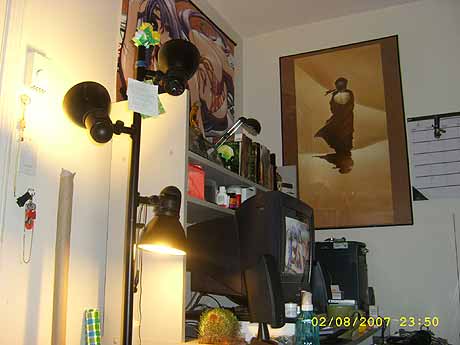 ^^ That’s my computer in the middle, with the door on the left of the picture. That framed picture is from an old movie, but I don’t know what that movie is. Jessica sent this to me a few years ago. I love this picture – it’s very romantic in a subtle way. The image is of a person wrapping itself over a naked woman. I’m going to reposition this picture somewhere else, cuz I don’t like where it is at the moment.

Anyone want to make bets right now to see whether I’ll turn into a typical nerd without a girlfriend for the next 50 years, playing with Gundams, model trains, computer gadgets, and growing Chia Pets, on top of endless hours and days of computer gaming, coupled with stuffs that only things will ever make any sense of?

[puts down a gold coin]

I don’t know how any game character can carry so much gold around, and still fight monsters… [ponders] 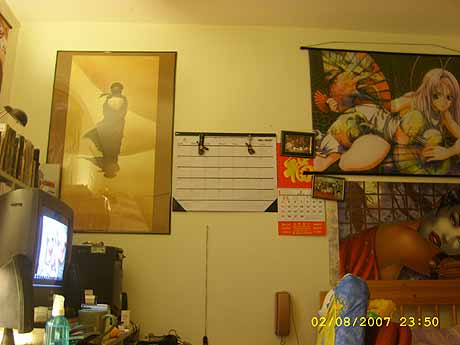 ^^ This wall used to be my favorite wall. It had an assortment of artwork and comics, but all have been removed over the last few years. 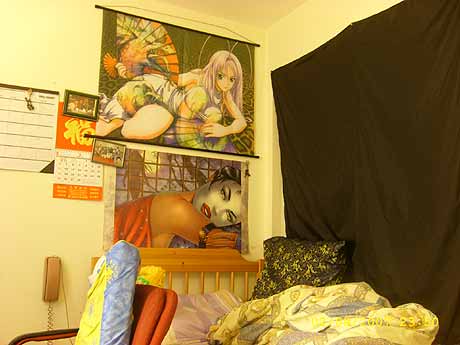 ^^ The second new wall-scroll above my bed, above the Shi/Tomoe poster. That’s Maya Natsume. 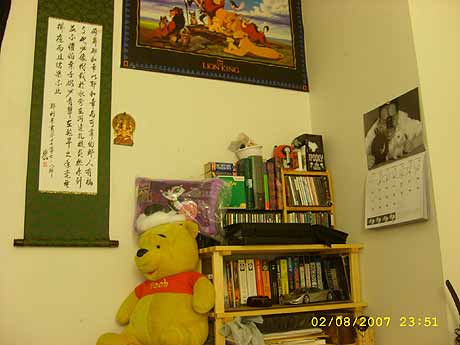 ^^ Laura’s Christian scripture scroll, a Little Buddha to keep him company, the Lion King poster my aunt gave me for X-Mas more than a decade ago, some books, Winnie, and a Kitty Bratz pillow Albert and Jenny gave me for my birthday this year, and yes, that is the Men With Buns calendar… 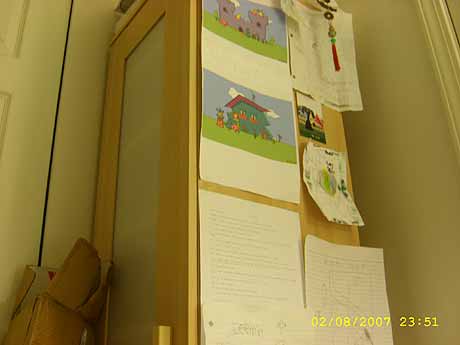 ^^ Some of the drawings my cousin Brandon made for me, as well as Jon’s list of stuffs. 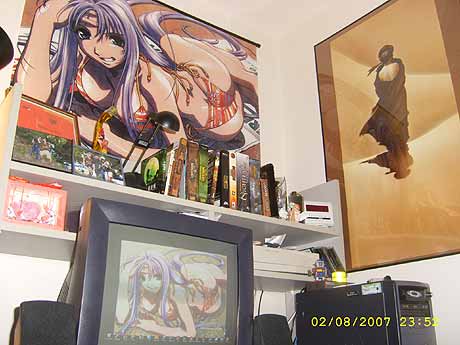 ^^ Maya Natsume in a bikini above my computer desk. Notice that Maya Natsume is also on my desktop. She’s the ultimate Nerd Succubi! 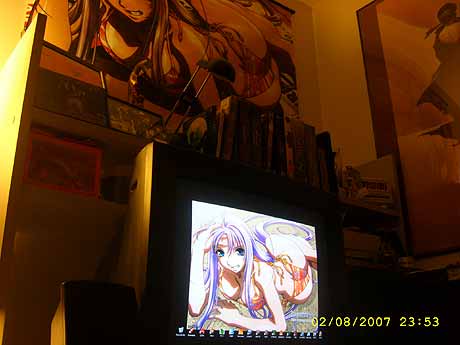 ^^ In natural lighting, but it’s a bit too dark though. The room’s lighting is in between this one and the previous one.

Yup, that’s it. If you’re wondering whether this is a place-filler for something meaningful or not, I can tell you that it’s not. The lack of sentimental entries lately is definitely a cause for worry, on my part maybe, that is, if I were to care that much.