Today was a pretty hot day. When I was driving home from work, geez, I was wondering how people can survive in this weather – how people in Hong Kong can survive in their weather! I did some stuff, and called Pat at 7:30pm. We talked mainly about tennis then asked if he would be interested in some cycling with me, then to the gym afterwards. I took my bike stuffs and met him at his place at 8:15pm. Geared up, then took a nice faster paced ride in the middle to south western ends of Richmond. 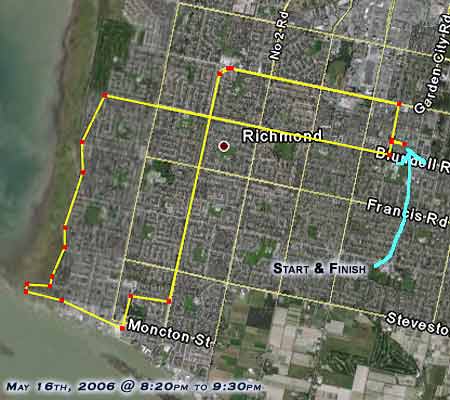 The thicker yellow line was our bike route. Our complete trip was about 1.25 hours, but the actual ride was about 50 minutes. It was pretty fun, even though most of it was flat. We tried to get a bit adventurous on some trails where it looked as though it had alternate routes. 8]

Those speeds are pretty good I think, considering I only went back into cycling a month ago. My quads have gotten bigger and my thighs stiffer. It was fun and it was a great work-out.

After that, we ended up at Fogg & Sudds. He had a Canadian Burger and ice tea, and I had a Furstenburg and Strips & Caesar. Yes, I know… Pat even remarked, “A beer after a work-out. That’s great man.”

We talked about fishing, Flora and her sexual open-ness, Flora’s big breasts, drinking back in the day, going out this Thursday, some other stuff, and then he told me that he was tired, so drove back to his place, dropped him off, and back home I went. I considered going to the gym, but nah… I’ll go tomorrow after work, since there is no Razor meeting tomorrow.

You know? It’s really great that I still have a lot of power in my legs. Riding at 2-7 felt really good. My shoulders are a little sore though, from stabilizing my bike on the rocky trail we went on. Of course, it’s from a combination of other things like my day job, typing, moving stuff around, etc… I haven’t had a back and shoulder massage for almost two months.

On the trail – same one I mentioned about in my previous entries about Cindy, we concidentally stopped at Francis Road. I stopped at the bench where I wrote some words about Cindy April 15th night-time. It was totally coincidental because I wasn’t aware of it. I actually forgot about it. I looked around and instantly remembered and looked over and there it was in black Sharpie ink…

So Pat teased me of course, and we rode off again. Some pictures…

The above pictures will give you an idea of the trail I am talking about.

Okay, so it’s late again… I’m going to retire earlier tonight. I’ve been sleeping around 4am to 5am every day for the last few weeks. Tonight will be my last night of rest before I get back into work mode.

Good night… or rather, good morning… 8]