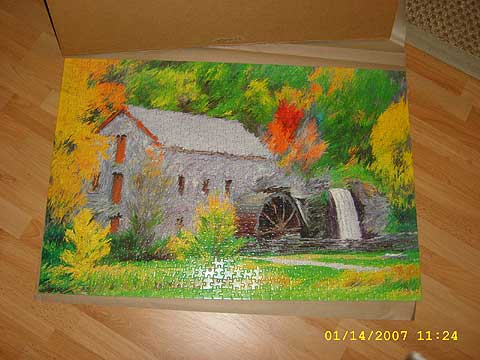 Since last week, Pat suggested we get together for a night of putting together a puzzle while possibly ‘watching’ some movie of sorts. Before heading to Laura’s last nght to drop off a parting gift for Julia and out for some BBT at Dragonball, Pat and I went to Toys R Us to get a 1000 piece puzzle of a colourful painting. From about 4:30pm to around 6:45pm, and then from 7:30pm to about 10:30pm, we managed to put together the entire frame – well, it’s missing one darn piece! Then we put together a few windows, part of a smaller tree, parts of the water wheel and parts of a large yellow tree. By 8pm, I was super sleepy, but my mind was totally awake. Pat on the other hand started becoming delirious. He started talking to himself, as if he was the first and 2nd person. It was awesome to see the workings of Leemanism upon the unsuspected! 8]

I went back to Pat’s place around 2:30pm today and worked on the puzzle until around 6:30pm. Lots of progress! Pat’s dad had a friend and his 9 year old daughter over at his place Sunday day time. Pat told me that the little girl was cute and very talkative and they managed to complete more of the puzzle while I was away. I went back to his place around 2:30pm yesterday until 5pm when I had to go home for dinner. Albert and Jenny called to see if they can join us after dinner. So we all met back at Pat’s place around 8pm until 10:30pm when I got super sleepy. I quickly drove home, changed and stuff, and then instantly fell asleep until I woke up around 8:40am. ^^ The bunch of maniacs! 5 thoughts on “Puzzle At Pat’s (Updated)”