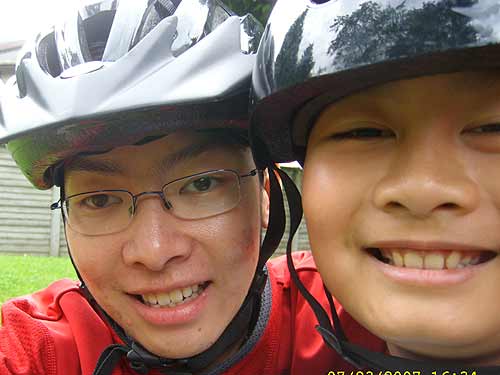 The Fonseca really hits the spot. Especially when it was chilled beforehand. ^_^

For the last three days, I thought about my relationship with my soon-to-be 10 year old cousin Brandon. During the summer, I watched this anime called “Aishiteruze Baby”. It’s about a 5 year old girl who’s dad died and the mother lost confidence in herself to raise the child on her own, and disappeared. So she was picked up by her elder aunt and the responsibility of looking after her was given to the aunt’s 17 year old son.

Since I finished it, I re-watch random episodes almost every day. It’s a really really really good anime. It’s different than the ones I use to watch back in high schoo. Nowadays, I’m totally for family-related comedy. Light hearted and silly, but not over-dramatic.

My cousin Brandon calls my house almost every night, mainly to talk with my mom, and occasionally with me. He tells me all sorts of things.

I recently helped him install a free MMO game on his computer and started playing Fiesta Online with him. As with previous times, I took note on how I interacted with him, and one common thing surfaced was how I taught him certain things. Maybe “taught” isn’t quite the right word, and more like “guide” him.

For example, Fiesta Online is a 3D hack and slash RPG. The interface needs to get used to, but it isn’t something difficult to learn, even at his age. However, when I asked him what quests he needed to do, he didn’t know. I said, “Click on the brown scroll at the bottom of the screen to check your quests.” Either his eye sight is particularly limited to a square inch spot on the screen or he simply didn’t understand my words. Thus he replied, “Where?”

My patience has gotten worst over the last couple of years, but it’s still there, a bit enough… So took the time to explain the mechanics behind the game, instead of putting him in the exact position. So instead of saying “It’s the brown rolled up paper lookalike, six icons from the right if the bottom corner menu” or something similar, I said to him, “If you move your mouse cursor over the icons, it will show a text label of what it is. Try moving your mouse over the icons.”

To say the least, it took a good 7 or 8 minutes to get him to finally find it. It was frustrating.

I remember I played World of Warcraft with him, and I unfortunately, made fun of him in a joking way, but when I realized it the night after, I stopped teasing him. However, it’s difficult when his character is the better healer and mine is the better tank, and all he does for some reason is just stand there while monsters rape my ass.

Don’t say that he’s young and that’s the reason, because I know a lot of 9 to 15 year olds who play this game who can kick my ass hundreds of times over.

Anyway, I remember when I taught him how to ride two wheels, that was difficult, but I was a lot more patient back then. Back in the summer, when he slept over for two weeks, it was quite satisfying to see that he can make jumps, wheelies, bunny hops, and ride down the stairs. He came a long way. Not with just my help, but with some encouragement from his teenage cousins as well.

I wish that every kid has a responsible caring older brother or older sister, at least, someone who they can look up to. Unfortunately, that isn’t the case. A lot of us grow up never really looking up to anyone or anything. Some of us, grow up for the moment, and eventually just worried about our own futures. Too bad, that we didn’t grow up through those transitioning stages thinking not only of ourselves, but those around us and those whom we may affect one way or another, like our parents, our brothers and sisters, our cousins, and our friends.

It’s great there are programs in the world like Big Brothers or Big Sisters, and I have to unfortunately say, (responsible) religion, non-profit organizations like Club Scouts, and such. However, for those who don’t have that sort of desire, it really just sucks.

With all the above said, I was supposed to have a younger sister. Did you know that? Well, my mom thought it was a younger sister, but there wasn’t that sort of technology back then to check genders. Then again, it was so early in the process that it wasn’t even a baby yet.

Since my mom told me a few months ago, occasionally, I think about it. The thing is though, maybe it was a good thing that I never had another sibling. I wasn’t a good brother to Edmond when we were growing up. We had our moments, but I was such an ass. If I had a younger sister or an even younger brother, I don’t think I would be a good sibling until much older, like now?

My methods in teaching the young uns aren’t really teaching and rather guiding them to the general direction of the answer. It reminds me of Brandon’s social studies homework that he called me for help on. We spent over an hour on it. Not because I couldn’t answer his homework questions – they were quite easy. No, but it was because I wanted him to use his brains and think where he might find the answers.

For example, a question he had was “What is the common regional term for the provinces of Alberta, Saskatchewan, and Manitoba?”

My methods in helping him find the answer:

Me: Look at your atlas, where are those provinces located?
Him: (checks the atlas) East?
Me: You’re sure about that?
Him: Let me check again. (checks) Yes, east.
Me: Okay, now go on Google or Wikipedia.org and search for “Eastern Provinces in Canada”
Him: (searches) I found it.
Me: Now read through the corresponding section that talks about the Eastern Provinces

Roughly 5 minutes later, still having trouble, I gave him hints:

Me: Remember, you’re looking for a common name or a common label for those three provinces, so naturally, you won’t be reading about “population” or “immigrants”.
Him: Wait, let me see.
Me: You will probably find it in the intro paragraphs.

Him: Wait, let me look at the map again. (checks map) I mixed up the direction!
Me: Really? No kidding?
Him: Okay, so it’s in the west.
Me: Where is British Columbia?
Him: Let me look at the map. (checks map) The Pacific Ocean is next to our province.
Me: Yes, like the previous answer.
Him: (checks map)
Me: Okay, I’ll give you another hint. This common name and the provinces are about flat plains, plentiful farmland, and there is a name for this. It’s a French word.

Anyhow, after some digging and spending more than an hour on this, I finally just gave him a direct hint…

Me: It starts with a “P”.
Him: (says a bunch of P related words and finally…
Me and Him together: PRAIRIE!

He asked me why I didn’t just tell him he was wrong in the beginning, and I told him that many times, researchers and leaders come to dead ends when they need to find things. If those researchers and leaders never come to dead ends, they will never learn to find alternate routes and different techniques in finding what they need to find. Plus, you will never learn to use your brain more than just believing what someone else says to you.

Seeing him grow up, I hope that he never grows up into a bad guy, or a heart breaker, or too rebellious against his mom. I hope he’ll always love and care about his sister and his mom, and learn to be responsible and considerate. Least of all, I hope he never grows up like me.

His favorite question has always been “Why?” He asked me why I didn’t want him to grow up like me, and I laughed wholeheartedly and said nothing.

The other day, I received an email from Michelle and Jon about stuff. I thought that as much as I may be a perverted dirty old man, A.K.A. DOM (“Hi, my name is Dom, and this is my sick disgusting friend Pai.”), it’s nice to live a more wholesome life. Nowadays, I can’t sleep around or have casual sexual activities with just anyone. I can’t. My libido wants to, but I can’t bring myself to doing anything.

In short, no feelings, no sex… …maybe. Strongly maybe.

In that anime “Aishiteruze Baby”, the 17 old is a womanizer who learned to behave as he looked after the 5 year old kid. I’m no womanizer. Shut up Terry. I didn’t ask for your opinion! ^_^

Ah, this reminds me to call him ASAP. Sorry buddy. A lot of stuff going on lately. Hope you’re well. Really.