Just a quicky before I go to bed – have to wake up two hours earlier today. So what’s that? about 5-6 hours of sleep. Yum.

Another nice ride with Pat yesterday from around 9pm to midnight. We were going to go to Iona Beach, but by half way, it was already pretty dark, so I suggested cheese nachos at the YVR (Vancouver International Airport). We got there but couldn’t find any bike racks. I guess they never figured that people might ride their bikes to the YVR, then fly somewhere… [waves fist] 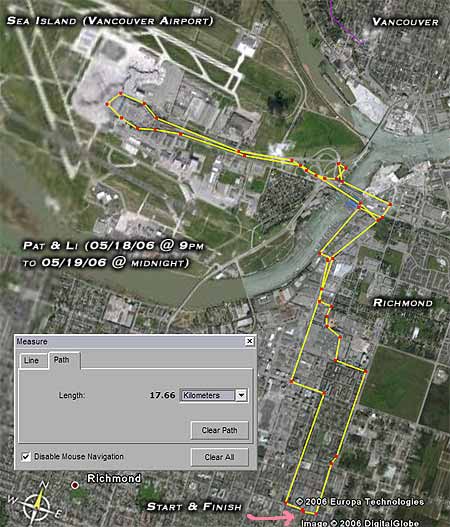 We wandered around the damn place, took the nasty smelling parkade elevator five times before we found where we wanted to go, then wandered a bit more, went back and forth to find a place to eat, and finally settled at White Spot (not really, it’s umm, yeah). Pat had an Ice Tea and I had a Corona. You know, it must be the unshaven stubbles on my chin that makes me look older, cuz no one checked my ID in the last three days. [ponders] OH NO! I’m GETTING NOTICEABILY OLD!!!

Obviously, the kitchen JUST closes as we sit down. NICE! This isn’t ANYWHERE like the airport in Hong Kong, where the dim sum place actually opens 24/7 and a nice bar to go along with the atmosphere…

So we took off and went to Hon’s. Yup, you got it. It was 10:50pm and Hon’s was closed. We ‘bumped’ into Hollywood Steak House and went in. There were two cute-ish Chinese girls who were working there. I wanted to…

Enough about that, blah blah, skipping… Mmm… Yes, I also had a Kokanee here too. 8] 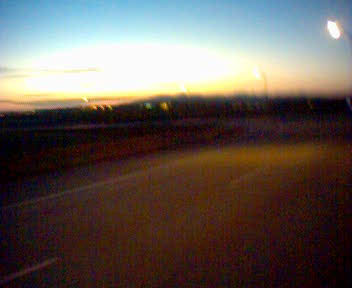 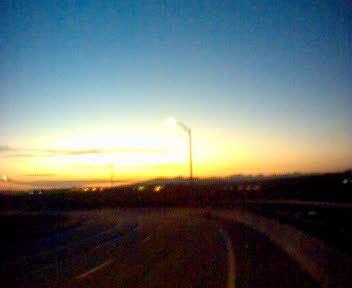 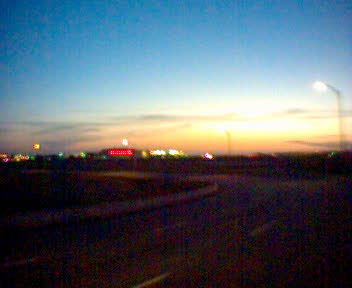 ^^ On the way there – the sun was down as you can see, but still light! This was on the overpass going west. If you look close enough, that tiny spot near the middle of the image is Pat on his bike. The red glowing thing actually reads “Air Canada”. It’s their northern hangar. Pat’s dad is an aircraft mechanic there. 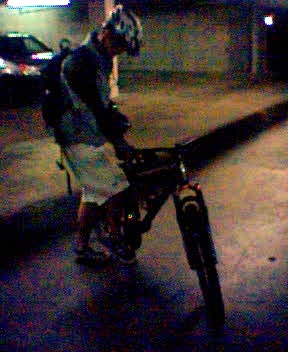 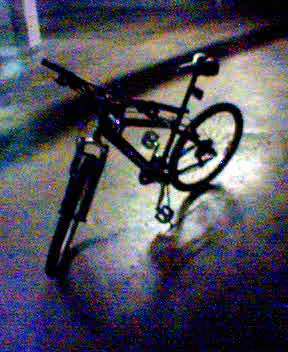 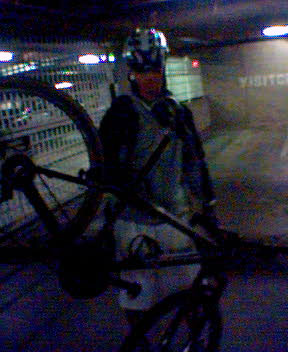 ^^ Three pics of Pat and his bike. He got her while in Japan. Even went to quite a few mountain biking trips with friends. Yum!

I love my 2nd generation Iron Horse. That was back in 2003 – got it July 31st, 2003 along with Pat’s bike, then we went to Bowen Island the following day. Still remember it! 8] Since then, Pat had his ‘new’ one stolen, bought another, then went to Japan for a couple of years, got two there, and brought this one back. So what’s that? This one would be his fourth since mid 2003. My baby is THE ORIGINAL! 8]

So many memories. Sometimes, I catch myself admiring my bike. It’s an entry level front-suspension bike, good for a beginner. I’ve ridden about 5600+ kilometres since 2003. This is based on an average distance: I ride about 5 to 13 kilometres each time, my average distance is about 7 to 8 kilometres. I’ve done quite a few 20 to 30 kilometre ones, and a few 2 to 4 km’s as well. Multiply the average to 700 times (I’ve done more, I am sure, but let’s just use this as a controlled duration), and that comes out to 5600. That’s about from here to Ottawa then straight down to the southern tip of Florida and a bit more.

SEX! [sigh] Just had to get that out of my system.

Anyway, it was a good ride. I look forward to next Saturday’s ride with Pat to Stanley Park from Richmond. It will be a bit grueling for the first 30 minutes, but I’ve noticed that I can climb a bit faster than Pat. Pat is good for flat road speed though. He also outlast me in terms of distance. Then again, his legs are a lot bigger and stronger than mine from playing tennis, eating well, and mountain biking.

Work mode tonight and Sat, then a drink-fest (barely) on Sun possibly with Flora and Pat of course… [grin]